The Origin of Iron 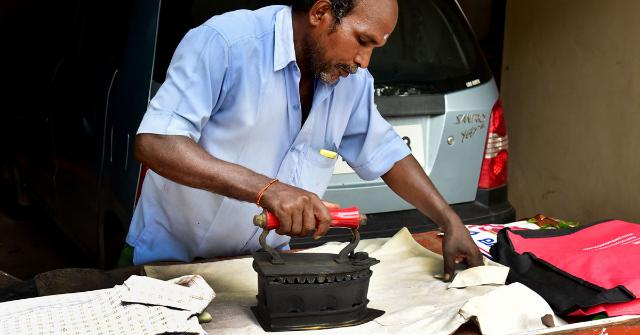 Since when does it bother people to see wrinkled clothes? This is a difficult question to answer clearly when exactly. What is clear is that the fabric lubricant, or now known as the iron, has evolved over hundreds of years from simple things. Sometimes it is made of stone, glass, wood, or metal. These materials often made irons in the past so heavy and difficult to use.

Therefore, it is not surprising that those whose clothes are well cared for must be people. Using such tools must be difficult and tiring. Only rich people can afford to hire someone to do it. They were usually slaves or servants.

In addition to removing creases on clothes, hot iron are then also used to kill parasites, fungi, and other bacteria in clothes. This was especially before the heated dryer was invented.

In its development, most modern irons are made of metal and plastic. They have many features like steam and temperature control.

Used by people in Greece around 400 BC. They used this iron tool to make folds on his linen robes. Goffering Iron is a round rod like a grinding rod that is heated before use.

People in the era of the Roman Empire had several kinds of tools that functioned like today's irons. One of them is a clothes press by hand. The tool is a kind of paddle or flat metal hammer used to pound clothes. Wrinkles on the fabric will disappear thanks to this method.
Another tool is the prelum. It is made of wood which is no different in shape from a wine press.. Two flat weight boards are placed between the levers which are also made of wood. The cloth or clothing is then placed between the two boards. The boards, which are moved by levers, will press the fabric in the center and make the fabric wrinkle-free.

You could say people in East Asia were the first to use hot metal to iron their clothes. At least since 1,000 years ago the ancient Chinese had a tool to smooth their clothes. The tool is made of heated iron. The shape looks like a large ice cream scoop. This tool is filled with hot coal, then pressed against a cloth.
It has an open chamber with a flat bottom and a handle. This space is later filled with hot coal or sand, which heats the bottom of the iron tool. How to use it is similar to how to use an iron today, which is rubbed over a cloth to remove wrinkles.

Between the 8th and 9th centuries CE, the Vikings in Scandinavia used ancient irons made of wood, glass, and stone. When they are about to be used, they are placed near the steam to heat up, then rubbed on the cloth. It is considered to be the earliest ironing tool in the western world. It looks like a mushroom.

Irons more similar to their present-day form appeared in Europe in the 1300s. This iron is a flat piece of iron with a metal handle. To heat it, this tool is placed on or in the fire. When it is hot, this tool should be taken with a soft cloth which is then rubbed on the cloth. Before that, a piece of cheesecloth must first be placed on top of the fabric to be ironed. This is to prevent the soot from hitting the fabric directly. The iron is used until it becomes too cold to wear.
At that time, many people felt they had to have more than one iron, That way they can use it while the other iron is heating up.

Around the 15th century, improvements to the shape of the iron were introduced. These hot iron boxes are made with cavities inside for placing heating elements, such as charcoal. The top is equipped with a handle. While the bottom is made of smooth metal. This also eliminates the need for additional fabric between the fabric and the iron. Because the bottom of the iron will not make the surface of the clothes dirty. This tool is used for several hundred years in various countries.
Charcoal irons are now an antique and of interest to many collectors. In fact, modern charcoal irons are produced in Asia and much of Africa.

In the 17th century, irons appeared in the western world in the form of a thick piece of iron, the bottom surface was flat, and was given an iron handle. This iron called a sad iron. Before use, the sad iron is heated in front of the fireplace or stove, only after that it is used to smooth clothes. The weakness of this iron is that when heated, the handle is hot because it is made of iron which is easy to absorb heat.
When stovetop technology was invented in the 19th century, some of the problems flat iron left behind were resolved. This iron can also be heated on a stovetop, which is much cleaner than a fire. These irons are called sad irons because they are heavy, weighing about 5.6 kg, and are difficult to move.

In 1870, a housewife named Mary Florence Potts in Ottumwa, Iowa, invented the printing iron. This iron is the result of the development of sad iron. In this iron, both ends are made pointed. Made that way to make ironing easier.
It didn't stop there, the following year Mary also made a removable sad iron. The goal is that the handle does not get hot when the sad iron is heated. Potts also makes removable wooden handles.
The idea was considered brilliant considering that the handle of the iron had been made from the same material since the Middle Ages. When a traditional iron is left on the coals, it is necessary to use a thick cloth or gloves to lift the iron to keepit from getting hot. Potts wooden handle ensures no burns. No wonder the iron was produced for almost 75 years.

After gas became available in American homes in the late 1800s, gas irons appeared. The earliest patented in 1874. At that time each house already  had a gas line. The gas iron is connected to the gas line by a pipe.
Gas irons have a combustion chamber that is connected to the gas flow. When this kiln is lit with a match, the iron heats up. The iron is very hot and the gas sometimes leaks. However, gas irons are lighter than sad irons.
Next, another fuel iron followed. These irons are heated with oil, gasoline, paraffin, and other fuels.

Many people believe that the electric iron was invented and patented by an American, Henry W. Seely in 1882. He developed the design a year earlier. This iron is a flat electric iron that still has some drawbacks, including taking a long time to heat up, but cooling very quickly. Even then, not all houses used electricity. So, not everyone can use an electric iron.

This electric iron was introduced to the market in 1905 by a Wisconsin-born Earl Holmes Richardson. This iron regulates the heating element in a way that concentrates heat at the tip of the soleplate. This method is claimed to make the ironing process better. Hotpoint became the first commercially successful electric laundry iron. It was officially named Hotpoint iron in 1907.

In the 1920s, Joseph Myers of The Silex Company improved the iron and its cord by adding an automatic heat control made of pure silver. The thermostat soon became a standard feature. Wireless (cordless) irons were first introduced in 1922, although they were not very successful. This iron was successfully sold for the first time in 1984.

Thomas Sears is the creator. The steam makes it easier to smooth dry stiff fabrics. Previously the user had to splash water on the cloth. Otherwise the clothes should be ironed when they are damp. Steam irons use a water tank that allows heated steam to be created and applied through small holes in the base of the iron.
Commercially, steam irons were first introduced in 1926 by the New York drying and cleaning compan Eldec. Unfortunately, it was not a commercial success.
A patent for the electric steam iron was then issued to Max Skolnik of Chicago in 1934. In 1938 Skolnik granted his patent to the Steam-O-Matic Corporation in New York in the form of exclusive rights to produce electric steam irons. This was the first steam iron to reach this level of popularity. During the 1940s and 1950s steam irons were also used more widely.

Now irons have undergone various more sophisticated changes, such as irons that are equipped with water containers, hot steam, and other innovations. For example, a robotic clothes folding machine. This is a laundry folding machine. Then it will fold it automatically. This machine can also steam, wrinkle, and soften and scent clothes. this kind of machine is patented by a company in California, FoldiMate.