The History of the Wheel 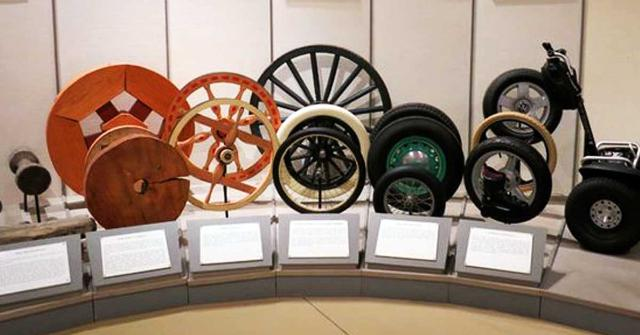 A wheel plays a big role in the mode of transport and transportation. Before the invention of the wheel, humans used animals to pull loads. In the American Indians, for example, weights were placed on a wooden frame, forming the letter "A", which was tied with leather straps to the body of a dog or ox. The French who came to America called this load frame travois.

However, in truth, the wheel was already used by the Aztecs in Mexico but more to make pottery toys, not part of a means of transportation. The Mesopotamians also made pots and bowls from clay that were shaped on wheels that were turned by hand.

To move heavier loads, humans use the technique of dragging loads. Solid wood beams are chosen as the base to shift heavy loads, such as large stones. The ancient Egyptians did this when building the pyramids, 4000-3000 BC. Several wooden blocks are placed under load. When the load is pulled forward by animal power, the beam that has been passed is immediately transferred to the front. And so on until the load reaches the desired location.

Not only relying on wooden blocks as a base, humans also began to use a kind of sled. Whole wooden beams are still used, laid longitudinally under the carriage. To keep the carriage in place, make notches in the wooden beams. From here the forerunner to the use of wheels as well as a load carriage. Developed around 3500-3000 BC, the Sumerians are thought to have developed this chariot. They, like the discovery of a chariot in the Puabi tomb complex in the area of Ur, made simple vehicles with two and four wheels.

By making notches on the wooden block, it is hoped that the wheels can move at the same speed. But it turns out that the wooden wheel can't roll or turn perfectly, often it just slips. Then the notch is expanded to form like an axle or connecting two wheels.

Because the wheels that are attached to the axle have a weakness, the idea came up to separate them. The wheel is made of wood in the shape of a circle. In the middle provided a hole as a shaft. In order to keep the wheels from being separated from the axle, a kind of peg is installed at the end of the axle. These wheels are very thick and heavy, and can not go fast. The ancient Romans called this model, which was used as an agricultural wagon, the tympani. Told, when Julius Caesar entered the mainland of England, around 55 BC, he found a painting that shows the ancient British society has used this form of wheel model on his chariot.

Wood is the main material for making rims, wheel axles, and pegs. However, this model makes a squeaky sound. To reduce the noise, the wheel axle is coated in copper and bronze. For a long time, wooden rims were still used. Around 1000 BC, metal rims, such as on the Celtic chariots, came into use. Celtic, put into use.

In ancient Egyptian tombs, chariots are depicted. At the wheel, the wheel axis looks long and slender. The shape of the bars looks light and artistic. The rim is one with the bars. Egyptian chariots, circa 2000 BC, had six spokes, while freight chariots had four. The invention of the spokes made the wheels lighter and easier to maneuver for the chariots.
The shape of the spokes did not develop until in 1802 GF Bauer registered his invention in the form of an arrangement of many grate wires connecting the rim to the wheel axle. In 1874, James Starley of England developed it. The spokes are mounted crosswise, tangent to each other, which makes the wheel sturdier.

The wooden wheels were originally given a layer of metal attached to the rim. The installation was carried out by a blacksmith. After the metal is completely attached, some parts are nailed so they don't come off. In addition, in some places, a metal plate is attached to prevent the tire from slipping off the rim.

Around 1839, Charles Goodyear, a bankrupt farm tool shop owner, introduced the technique of vulcanization to process rubber into tires or wheel guards. After solid tires were used as wheel liners, Robert William Thomson, a young Scottish engineer, introduced air-filled tires in 1847. The air tires were mounted on the wheels of horse-drawn carts. As a result, the speed of the train is almost without shaking. Then, for the first time, air-filled tires for car wheels were introduced by Andre and Eduard Michelin, both businessmen from France, in 1895. The wheels became even more comfortable to roll.