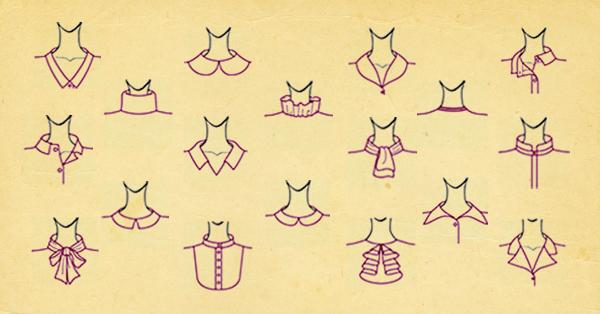 New collars really appeared especially in the western world in the mid-1400s. Until the mid-15th century, it seems that people tend to wear clothes that have a low neckline without a collar. Interestingly, the collar is also used as a status symbol.

A mandarin collar, upright collar, or choker collar is a style of short collar that unfolds on a shirt or jacket. This style comes from the western name for Chinese bureaucrats during the Qing Dynasty. Those who wear collared clothes like this as part of their uniform.

The collar of this model in the 1500s might be like wearing a watch worth hundreds of millions of today. It was a kind of unnecessary fashion, but it was important to show the status of the wearer. The revival of this collar model coincided with the progress of making starch flour. This material is used to help create the perfect ruff collar shape.
This kind of collar model became more and more popular in the 1580s and 1590s. Some even wear this kind of collar with six meters of material. The material produces a ruffled ruff collar with 600 pleats. The users are not only women. but also men.
But not everyone seems to like the ruff collar model. Around 1585, this collar in London was touted as a French fashion. However, when the British came to Paris, Parisians who did not know fashion would make fun of him by saying "British monsters".
The love for this ruff collar model did not last long. Because it is difficult to care for and expensive.

This collar stands stiffly behind the neck with an open and raised shape. This collar model was popular among the nobles. It is usually worn with an open neck and low cut dress that shows part of the wearer's chest.
To keep them upright, these collars are usually starched and sometimes wired. Lace, embroidered satin, or other lightweight fabrics can allow them to reach heights that rise above the wearer's shoulders and head. It is sometimes encrusted with small gems.
This breed was introduced in France by Marie de' Medici, nephew of the Grand Duke of Tuscany, in the 16th century CE. She imported it at exorbitant prices from her home country, Italy, because she had to violate the laws restricting all dealings with Italy. The designation for this collar bears his last name two centuries later.

This collar is also a type of collar that is stiff and wide under the chin. It was widely used during the early decades of the 17th century in Spain. It became very popular in the late 16th and early 17th centuries. But then replaced by the trend of upright collars which are more practical and made of lightweight materials, because this model often makes the wearer uncomfortable and the head difficult to move.

A large collar with the sides near the neck that is high, then flaps up to the shoulders. Usually made with lace or brocade. This model was worn in the second quarter of the 17th century. The collar is as seen in a painting by Sir Anthony Van Dyck entitled Charles I.

This collar is wide and has a low neckline, accentuating the shoulders of the woman who wears it. Usually made of brocade, lace or other thin fabrics. Bertha collar dresses were very popular in the 17th and 19th centuries. Now, this kind of collared dress model is still often used, especially for variations in wedding dresses.

In the 1820s, Hannah Montague formulated the idea of creating a collar that could be removed from a shirt. Her husband, Orlando Montague was the first to wear this model.
The ruff collar is also actually removable. But this time the shape is just like the collar of today's shirts.
The goal is to make it easy to wash. Usually the collar of the shirt gets dirty faster than other parts.
Soon after this collar model was born, Ebenezer Brown and Orlando Montague began mass-producing this collar in Troy, New York. Removable collars are usually made of different materials than shirts, from cotton to linen, and are made in only one color, white. Because they are removable, the collars are usually stiff as cardboard. The collar is attached to the shirt by a set of buttons, one at the front and one at the back.
The popularity of these detachable collars began to wane in the 1920s and 1930s. Global warming, lighter-weight fabrics, and a more relaxed social attitude support these conditions.

This collar is perhaps the most memorable of the British Royal Navy uniforms. This collar is V-shaped at the front of the neck, not stiff, and square at the back. The shape of this collar continues to be maintained even though the uniform model has continued to change since it was first introduced in 1857. This kind of collar was then widely adopted for not only naval uniforms. For example school uniforms in several countries.

The detachable clergy collar was invented in 1865 by Donald Mcleod, pastor of the Church of Scotland (Presbyterian) in Glasgow. This collar covers the neck with a small white box at the base of the throat. This white part can be removed from the priest's shirt. Once this part is removed, the priest's shirt is the same as normal shirts. Initially this collar was always made of linen or cotton. But now often made of plastic.

This collar was worn by both upper class men and women during the reign of King Edward VII (1901-1910) in Great Britain. Clothing with a collar is commonly used for everyone, as well as formal suits. This stylish collar is very high, sticks to the neckline, then extends all the way to the chin. It covers the front it extends to the throat and in the back extends to the hairline.

This collar was also born during the time of Edward VII. It was Charvet, a famous French fashion house, who designed it for the British ruler. This collar also became popular at the end of the 19th century.

This collar is flat with rounded corners. The collar was named Peter Pan because of the costume of Maude Adams, the American actress when she played before her, this type of collar had been widely used. When worn as a Peter Pan costume, this collar was designed by John White Alexander and his wife, in collaboration with Maude Adams in New York.
Neither JM Barrie's book or play, which depicts Peter Pan wearing a cobweb and leaves, and the original 1904 London production starring Nina Boucicault, have similar collar designs. Although later depictions of Peter Pan did not wear a collar, the Adams collar proved the success of fashion in the United States and Britain in maintaining its association with acting.
Althoughit has been a part of women's fashion since the 1900s, including the details of wedding dresses that were popular in the mid-20th century, the collar has been primarily associated with children's clothing since the 1920s.
The Peter Pan collar also bears some resemblance to a number of previous designs. It was mainly Claudine or Claudine's col collar from Paris. This collar is round in shape and usually worn with a scarf.
Claudine's collar is named after the character in Colette's 1900, titled Claudine I'ecole, who is depicted wearing it. Claudine inspired various accessories bearing her name, including claudinets, round collars for women and children, as well as perfume.

In 1933, tennis star Rene Lacoste wanted to change his sportswear to be more comfortable. The players then wore Oxford cotton shirts with rolled-up sleeves. Lacoste also designed what is now known as the modern polo shirt. He got the idea from the shirt his polo playmate was wearing. That's why his name was then called a polo shirt (polo shirt). This shirt made its debut on the US tennis courts in 1926. In 1927 Lacoste added his legendary logo to his shirt in homage to his nickname, le Crocodile.
After retiring from tennis in 1932, Lacoste founded his company Eponymous in 1933. He began selling his tennis shirts to the public. This style was quickly adopted by other tennis players as well as polo and golf players. In its development, polo shirts have penetrated the fashion world and become versatile clothing. Now it's no longer just a t-shirt for sports.

In a more modern era the shape of the collar is more free, the shape is diverse. Collars that developed in the past are often the inspiration for today's collars.