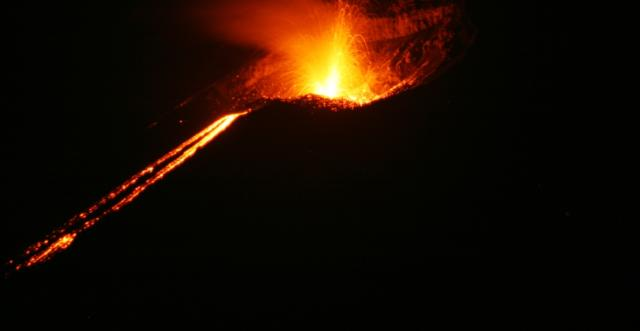 One afternoon, June 29, 1927, nearly 95 years have passed since the cataclysmic eruption of its mother, Mount Krakatoa. A fisherman pulling a net after a long day of paddling, witnessed something extraordinary and unexpected.

With a rumble, enormous waves of gas suddenly rise to the surface of the sea. The bubbles, in strange and random combinations, appeared everywhere, surrounding the boat. The fisherman was confused and scared. The bubbles exploded, spitting out ash and a foul-smelling sulfur gas.

The bubbles, according to journalist Simon Winchester in Krakatoa: When the World Exploded, 27 August 1883, were the first indications on the surface that a new volcano lurking deep in the ocean floor was trying to establish itself.

Its growth is so fast and its activities change. In addition to the bubbles that became more violent, black foam, steam, rock, and even flames appeared. Finally, on January 26, 1928, the volume of bubbles and flames turned to solid ash and rock, and came to the surface: a new, curved thin layer of land appeared for the first time above sea level. The new land grew, black and sickle-like, until it finally formed an island.

"He gave him a name that still sticks with him today: Anak Krakatoa," Simon wrote

According to Simon Petroeschevsky's observation post proved invaluable for monitoring Child Krakatoa's development: it grew from a baby 20 feet tall and half a mile long, started life in 1930, to a peak 500 feet high and a mile long and a mile wide in 1950, and now became a monster island 1,500 feet high and two craters.

"It has always been an extraordinarily active volcano, one that has grown rapidly and unstoppably since its birth," Simon wrote.

91 years later from the appearance of signs of his birth, Anak Krakatau has erupted every day since June 29, 2018. The eruption activity is suspected to be the cause of the tsunami in the Sunda Strait on Saturday night, December 22, 2018 at 21:27 WIB. The tsunami hit the coasts of three areas: Pandeglang, Serang, and South Lampung.
Through his Twitter account, @Sutopo_PN, Sutopo Purwo Nugroho, head of the BNPB's Center for Information Data and Public Relations, said that tsunamis in the Sunda Strait are rare. The eruption of Mount Anak Krakatau is also not large. Continuous tremor but no suspicious high frequency. There was no earthquake that triggered a tsunami at the time. That is the difficulty of determining the cause of the tsunami at the beginning of the incident.
However, Sutopo said that "the cause of the tsunami in Pandeglang and South Lampung was probably a combination of underwater landslides due to the influence of the eruption of Mount Anak Krakatau and tidal waves at full moon."
In a press conference on December 24 2018, Dwikorita Karnawati, head of the BMKG (Meteorology, Climatology and Geophysics Agency) said that the Sunda Strait tsunami was unusual and complex. The trigger was the eruption of Mount Anak Krakatau which resulted in the collapse of the crater (volcanic crater) resulting in an underwater landslide in the southwest. The temporary calculation of the avalanche is 64 hectares. Volcanic tremor equivalent to magnitude 3.4 exacerbated by heavy rainfall and tidal waves.
The impact of the tsunami in the Sunda Strait as of December 25, 2018 recorded 429 people died, 1,485 people were injured, 154 people were missing, and 16,082 people were replaced. Physical damage as many as 882 houses, 73 inns, 60 stalls, 434 boats and ships, 24 four-wheeled vehicles, one dock, and one shelter were damaged.