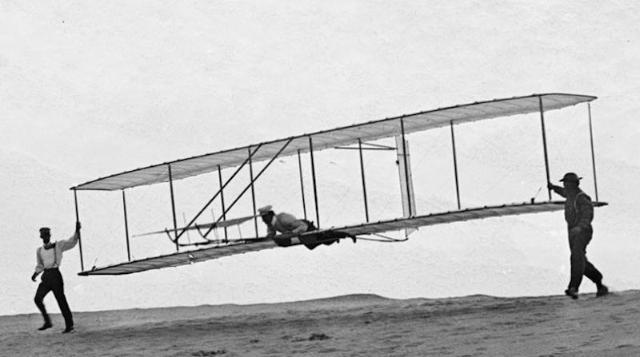 Humans never stop to make "iron birds" that can carry many passengers and fly much more quickly, comfortably, and safely. The following is the history of the development of aircraft.
Spurred on by the success of the Zeppelin flying with engines and rudders, Orville and Wilbur Wright, two brothers from the United States, designed a twin-wing aircraft with an engine equivalent to 12 horsepower. They call it Flyer. Wright invited the press and the general public to witness a test flight on December 17, 1903 at Kitty Hawk hill. With a pilot lying under the wing, the plane was able to fly as high as 36 meters for 12 seconds. This success is considered a new milestone in the development of winged aircraft with engines in "flight-heavier-than-air".

A paper on the concept of fixed-wing modern airplanes was published in Germany in 1904. Professor Ludwig Prandtl's work is considered a new milestone in aerodynamics technology (the science dealing with air friction on solid objects). Fixed-wing is a concept that allows an aircraft to fly without moving its wings because it is able to balance air friction. With this technology, the aircraft has a stronger lift.

For the first time in history, a single-wing engine aircraft was able to take off from the surface of the water in 1910. This aircraft was called the Fabre Hydravion, after its maker, Henri Fabre. At the same time, Eardley Billing introduced the first airplane simulation engine. With this tool, one does not need to fly immediately while learning to control the plane.

The end of World War I made aircraft technology develop rapidly, especially aircraft with more than two people. Boeing, an American aircraft manufacturer, introduced the first commercial passenger aircraft in 1933. Two pilots were required to take and land this aircraft. This aircraft is twin engine with single wing. Even so, this plane can accommodate 10 people.

Until 1937, all modern airplanes still use propellers even though the jet engine was invented in 1930 by Frank Whittle, an Englishman. In 1937, jet engine aircraft began to be developed. Two years later, jet-engined planes were able to fly. The use of jet engines changed the shape of the wings. The wings are no longer rectangular. Slightly oval at the end and located just below or below the fuselage. The plane was known as the Heinkel HE 178.

After World War II, Britain developed jet aircraft for commercial purposes. With the support of the aircraft manufacturing company, De Havilland, England succeeded in making it. The De Havilland Comet, as the plane was named, first flew in July 1949 from London to South Africa.

This aircraft has been the backbone of regional flights (short and medium distance with a capacity of 35-100 passengers) in Indonesia since 1971. First flown on May 9, 1967, this aircraft quickly attracted the attention of the public. Several world airlines are interested in it, including Garuda Airways. Fokker 28 is considered of the airstrip in Indonesia which has not been completely paved. This aircraft last aired in Indonesia in 2001.

Seeing the success of the Fokker Aircraft Company, Boeing did not want to lose. In 1969, the world's largest passenger aircraft was introduced. With a length of 70 meters and a width of 59 meters, this plane is called a jumbo jet. This passenger plane is divided into two decks / floors. With a capacity of 400 passengers, the 747 remains the longest-running passengers aircraft.

As Boeing's enemy, Airbus does not want to lose. After producing the largest B-707 of its era in 1969, Boeing produced the B747 in 1970 which was even larger and became the largest commercial aircraft in history until 2005. After that Airbus produced the giant A380 whose standard version has 854 passenger seats or 525 seats, passengers if designed for three classes: executive, business, and economy.