Behind the Chest Cover 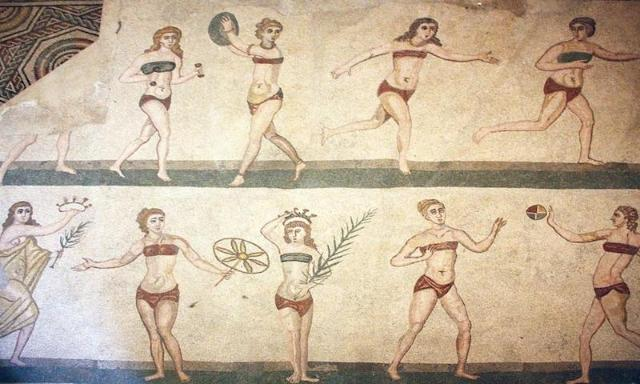 Not all women like to wear a bra, or buste houder (BH) in Dutch. Without it, it is healthier and a symbol of women's freedom. But, since centuries ago, the bra has become a complement to dress. Women from various walks of life wear it, both as a sign of maturity, for reasons of modesty, to social status.
Here is the history of the bra.

A piece of wool or linen cloth that women wear to cover their chests. It appears in frescoes in Minoa, a civilization on the island of Crete in 3000 - 2700 BC.

The leather breastplate worn by Roman women in 753 BC - 476 AD to achieve the coveted small breasts of the time.

Dudou, which means tummy tuck, is designed to minimize the shape of the bust. Worn by women from the Ming and Jing Dynasties in the 14th century.

Patented Luman Chapman from the United States in 1863. His innovations with "breast wrap" and "elastic shoulder straps" were designed to reduce friction on the breasts caused by conventional corsets.

The originator was Herminie Cadolle, a corset manufacturer in Paris, France, in 1889. She cut the corset into two separate parts, the top supporting the bust and the bottom for the waist corset.

Similar to the bra we know today, it had separate cups for the bust, shoulder straps, and snap buttons. Marie Tucek received a patent for this breast support in 1893.

The word brassiere, which in French menas "support", was first used by Vogue magazine in 1907. In 1911, it was added to the Oxford, English dictionary.

The modern bra is credited to Mary Phelps Jacob, a young American socialite. Finding her corset ruin her evening gown, Mary sewed two silk handkerchiefs with pink ribbons. He got a patent in 1914.

The fashion trends of the 1920s required a minimalist bra to flatten the chest and fit a dress that had a low waistline.

American businessman Ida Rosenthal and her husband , William Rosenthal, and Enid Bissett developed the cup bra through the Maidenform company in 1922. This bra supports the breasts naturally, as opposed to the old bras that were made to flatten the chest.

Underwire bras appeared in the 1930s to provide extra support for women's breasts. This bra uses a stiff but thin wire in the form of a semicircle that is attached to the bra fabric. Wire can be made of metal, plastic, or resin.

In 1932 SH Camp and Company determined cup sizes with the labels A (smallest), B, C, and D (largest).

Charles L. Lang in collaboration with Charles W. Walton, a chemist, created Poses, the adhesive for bra cups, in the 1940s. Designed to allow women to get an even tone out of their tan black from sunbathing on the beach.

During World War II, torpedo-style bras were popular because they were claimed to offer protection for women working in factories.

In 1947, American businessman Frederick Mellinger introduced a padded bra in 1947 and push-up bra that made the chest fuller and sexier a year later.

The rise of the "sweater girl" style, popularized by artists Marilyn Monroe and Lana Turner in the 1950s, encouraged women to wear bullet bras, accentuating the appearance of a large cup size.

Introduced in 1952. It has a hidden air bag and pump. Airbags can be inflated to help women achieve the desired shape.

It was created by Lisa Lindahl, a graduate student at the University of Vermont, USA, and Polly Smith, a costume designer, and her assistant, Hinda Schreiber Miller, in 1977. This idea came about when Lindahl complained that she wasn't comfortable exercising wearing a bra.

Popularized The Queen of Pop Madonna. She wore a conical corset bra designed by Jean Paul Gaultier during the "Blond Ambition World Tour" in 1990.

Lifts and compresses the breasts while accentuating the voluptuous cleavage. It gained popularity in the 1990s. His ad featuring model Eva Herzigova and the slogan "Hello Boys" became iconic.

It accentuates the breasts in a more attractive and comfortable way tan using cotton or cloth. Survived briefly in the 2000s for fear of popping the needle.

Invented by Lisca, a brand from Slovenia, in 2009. The foam cup bra is made with high technology that can react to body temperature and follow the movement of the wearer.

La Decollette was released , a Dutch brand, in 2010 and claimed to be able to prevent wrinkles on the breast.

Triumph, a German brand, introduced Magic Wire technology in 2014. It is comfortable to wear thanks to its flexible and soft wire technology that replaces traditional metal wire.