Be careful with the Dagger 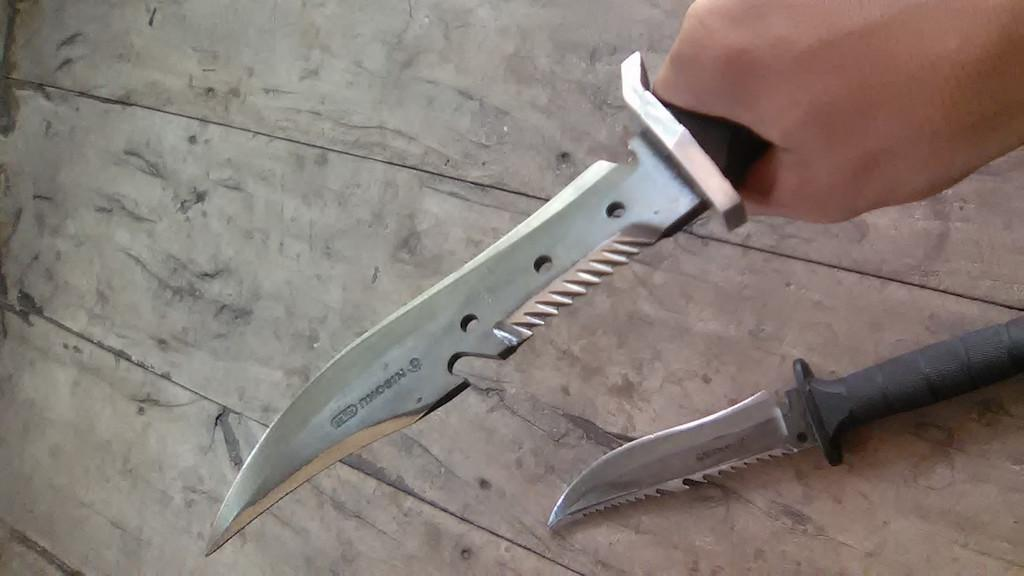 A dagger, an evolutionary from of a cuting knife, is one of the weapons used by humans in combat. It has two equally sharp edges and tapered at the ends. Usually the dagger is no longer than 50 centimeters. Looking at its shape, the dagger is suitable for close combat, such as stabbing and stabbing the opponent.

Stone Age warriors, around 20,000 BC, tried to invent weapons for self-defense. One was a dagger made of stone, usually selected from calcareous areas. In order to get a sharp edge, the stone is struck with another stone to form a sharp edge. For a comfortable grip, the handle is wrapped around the skin or muscle part of the animal.

Commonly worn by Roman soldiers, tied to the left side of the body. The length is no more than 30 centimeters. The shape of the dagger's eye is like a leaf. Pugio becomes the last weapon if the main weapon, such as a sword or spear, is out of hand. His name became famous after being used by Marcus Brutus, a senator, to stab Gaius Julius Caesar (100-44 BC).

Blacksmiths from the Iberian region in southern Spain since the 5th century BC are renowned for making high-quality iron daggers. The shape is still simple, with a triangular dagger and connecting to the hilt. This Iberian dagger model was later adopted by Hannibal's troops from Carthage, which was located in the Mediterranean and became the main competitor of the Romans.

The people of the archipelago knew iron in the last centuries BC. From here emerged the manufacture of a typical iron dagger called a kris. In addition to iron, some kris are made of meteorites, fragments of meteor rocks that fell to the earth, which contain metal materials such as titanium. keris has a wavy shape, with a length of approximately 40 centimeters. In West Java there is a cleaver, while Aceh has a rencong.

Developed in mainland Europe in the 10th century. The blade of the dagger is slender, and there is a kind of iron barrier between the blade and the gripped part to protect the hand when swinging the dagger. Then at the end of the handle that is gripped there is a metal which is usually round in shape. The function of this metal, which is usually called a pommel, is to hit the opponent back.

This dagger developed in Europe, especially England, around the 13th century, and was commonly used by knights. The eye of the dagger is slender, simple, tapering at the tip. As a support for close-range duels, it weighs less than half a kilogram, with a length of about 30 centimeters. The handles are often made of bone or wood.

This slender dagger developed in Italy, around the 1600s, taken from the word stylus or writing instrument of the ancient Greek era. The blade is slender, three or four-sided, and tapered at the tip. Its simple shape makes it easy to hide when it will be used to ambush enemies. Stilettos can penetrate between armor, due to the slender shape of the blade.

This dagger with a handle or handle in the shape of the letter 'H' was developed in the plains of Punjab, India. The blade of the dagger is simple, triangular in shape, with sharpness on both sides. Apart from being a weapon, the katar indicates the status of the wearer. A tiger hunter from Punjab sometimes only uses a katar as a weapon, which shows his skill and bravery. When the British came to power in India, the katar became a collector's item from Europe.

Dagger from Arkansas, United States, this is often called "toothpick from Arkansas". The blade model is simple, forming an isosceles triangle with a pointed tip with a length of approximately 30 centimeters. This dagger has a good balance of shape and weight, making it suitable when thrown at the target. One of the makers of this knife is James Black (1800-1872) who is also famous for making Bowie knives.

The most famous model of this Gerber dagger is the Mark II, which became a favorite of American troops in the Vietnam field. The name Gerber is taken from the family name of knife maker Pete Gerber from Oregon-United States. In 1968, Al Mar, a Chinese immigrant to America and a former member of the special forces reserve, joined the Gerber company and designed a Gerber dagger with additional serrations.